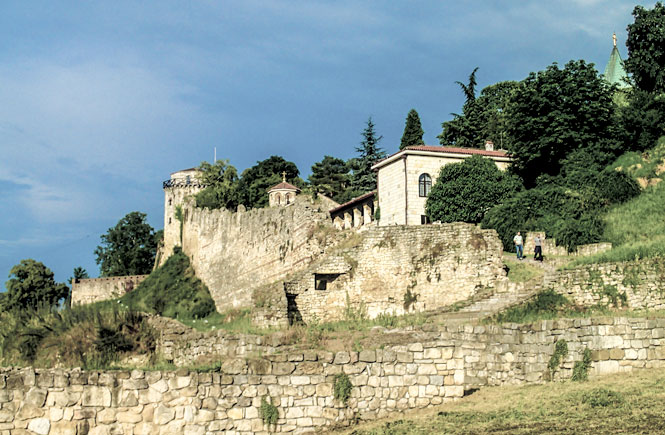 Our trip is half way through. It is hard to believe it. But it is. So on we go. Today we were told to dress conservative as we would be going to a grave site today. So covering up legs and shoulders everywhere we go. We made the mistake of getting on the bus last so we got booted to the back of the bus. That was ok, Elle got booted to the back of the bus too, so we shared the seats together.

So during the civil war in Bosinia, the Serbians were rounding up the muslim men and boys and were taking them to the country side to questions them for more information on where other muslims were and then kill them. In Srebrenica there is an abandoned factory that was used for this purpose and is not a memorial for everything that happened there. It is a crazy place. They have over 8000 white graves laid out in a field across the street. It’s a peaceful place with a prayer hall and hills of green. But seeing that many deaths that happened due to human cruelty is upsetting. And to have the knowledge that this did not happen that long ago is the scary part. 20 years ago is not that far away. And yet, we haven’t yet found a way to stop civilian killings. It seems wrong. None of these people were looking for trouble, they just wanted to survive. 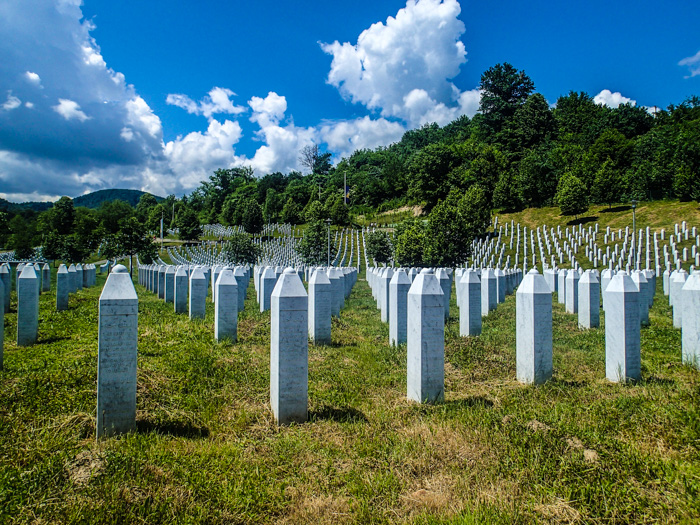 Across the street from the grave yard, was the factory in which they killed the muslims. They would lock them into rooms in the factory, then when it was time, they would take them to the killing room. Only a small part of the factory was open to the public. You can walk around the outside of the factory and see the building decomposing and returning to nature, but the stories of this place live on. We explored the inside first, not knowing how big the inside museum would be. Again it was fairly small. The entrance is really just the factory with a guest book, then you walk into the actual factory which would have held the machines at one time. Now it’s a big empty room with large photos on the walls. Some of the factory machines are still there. They have also built two small viewing rooms in the middle of the floor so that you can watch a documentary and see items left behind from the victims.

Off the large room there is a small holding room, and then through that is the killing room. The killing room was a dark, window-less room, with walls covered in the victims blood. There were two lines of bullet holes in the walls, one at adult height and one at child height. There was no real mistaking what happened in this room. And it was small probably 5 feet by 8 feet. There was no way of getting out of that room. It would be the stuff nightmares were made of.

Back into the open room, we took our time, looking over the photos of graffiti, refugees, and graves of victims. Its just heartbreaking to see such cruelty. Outside the factory, the skies were blue and birds were singing and flying around. The surrounding factory buildings were crumbling. Some were just skeletons of what they once were. In these buildings, trees are growing and grass is taking over the concrete. I like to think its symbolic on how wounds heal over time. But that may just be wishful thinking. After our hour of refection and exploration we all climbed back onto the bus to see what Serbia had in store for us.

It was a short half hour drive to the border from Srebrenica. However, once we got to the border, the border guard refused to let us through. It said that tour buses had to go through a border crossing an hour away, that was a larger border crossing and could handle busses. This border crossing has 2 lanes on either side, so I don’t know what the problem was, but you’re not going to win with border guards, so off we went. The second boarder had only one lane in, and one lane out, and you needed to cross a river. It was a lot smaller then the original border. It took a while to get across as the Serbs took a long time to process all the passports. The people behind us were so not impressed.

After the wait we moved on, eager to get to lunch. We went through a lot of construction. The roads here were really bumpy. And twisty. We were spiraling up the mountainside to get to the plains. We had a stop in, who knows where, really. It was a small town that had no restaurants, just a hotel, a supermarket, a gas station and a pharmacy. One of the girls on our tour had to go to the washroom really bad, so asked the pharmacy if they had one, they said ok, but then started to take her to their house. So it was a really small town. I decided to use the public washrooms in the hotel, which was a good call, because everyone else went to the public washrooms in the gas station, so there was a line up. 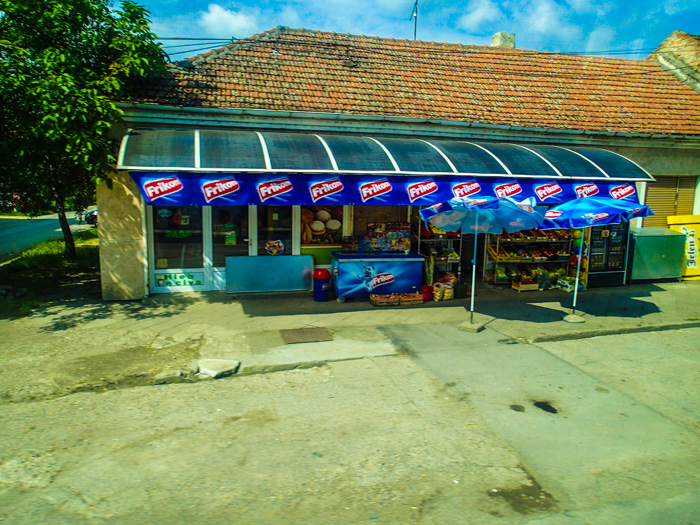 We had our lunch at the super market. It was a tiny super market, but it was here that I discovered one of my favourite Balkan snacks, pretzels with peanut butter in them. So good! Somehow, one of our tour mates figured out how to get a pizza for us, so we had home made pizza for lunch. Everyone else on the tour made sandwiches.

After watching the random dogs running around the town, we hopped back into the bus for more driving. There is a lot of driving on this day. We did not arrive into Belgrade until 4pm, which was later then the tour guide was hoping for. So instead of settling into our hotel, we went straight into the city to Belgrade Fortress the fort that protected Belgrade. We were let off at the bottom of the fort, so that we could take our time, and walk up the hill, and take in the sights. It is a really impressive fort. And it is massive. Now a days, they have made the fort into a park for the citizens of Belgrade. And they definitely use it. Every park bench was full of people, and not just people enjoying the park, people kissing and really “enjoying” the park. There was no lack of public affection in this park. It was a little awkward. 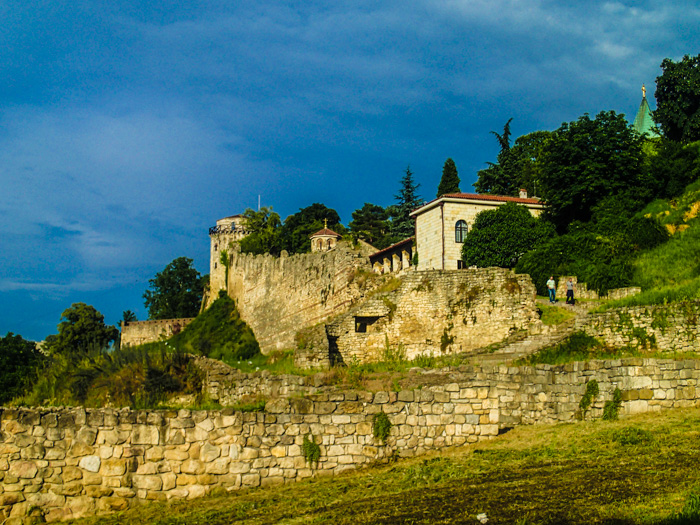 But the fort was cool. We had to hike up this big hill to get behind the walls, and we ended up going through a pretty little church yard. There was a wedding happening while we were there, so everything looked romantic with roses every where. Once we passed by the church, we were able to go through the gates into the fort. The gates were like a mini castle, with a drawbridge and towers. The fort had an amazing view of the Danube and Sava rivers. It was also empty on the inside. Inside the fort was all park land. I’m not sure if this is due to time, and they got rid of the buildings that used to be here, or if that was the way it always was. We had a little time to wander around, get some shots and all that.  We could see boats on the river that were already playing loud club beats. They were the bars of Belgrade, that most of the tourists go to. 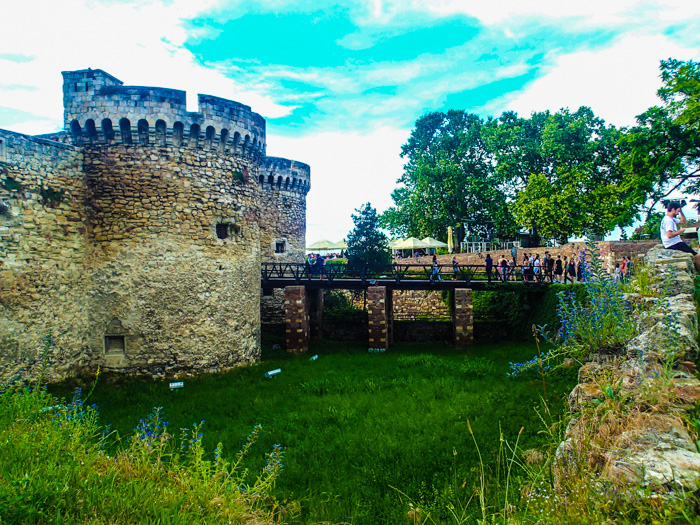 We checked into our hotel, and it was very modern. The TV knew our names when we turned it on, and our room was so nice. By far the fanciest hotel for sure. We basically had enough time to grab a quick shower, put on some makeup and a dress and head out. We were then off to a Serbian cultural dinner with the whole tour group

We were able to walk there which was nice, as it was getting late, an this would be the last chance we had to check out the city. Well for some of us. Some of the girls on the tour had on fantastically high heels and had trouble with the walk. One cool thing we found here was the garbage cans. So basically the garbage can part hinges back, and below that is a huge metal bin, which connects the garbage truck and mechanically empties. How cool is that? Ok, maybe less cool then I think. But still.

We walked to a really cool cobble stoned area, where they had all these old restaurants with patios. It reminded  me a lot of back home. We found once of them, and went inside. Inside the decor was very historic, very baby blue with white wainscotting and crown moulding. I think they said it was originally a restaurant in the 1800’s but don’t quote me on that one. We ended up sitting with our dinner buddies Amy, Jena and Krista. Since they had a table with a great view of the dancing, and they were awesome. We all chose our meal, four days ahead of time. So a lot of us forgot what we had ordered at this point. Trouble! But we basically all defaulted to chicken and those of us that remembered got what we ordered. The food was awesome. But I am not a picky eater. Others may have not been so happy with the food. While we ate we had traditional dancer preforming for us in traditional Serbian costumes. A little awkward when there is no stage and they are dancing right next to you, but it was memories for sure. The dancers would cry out YIPPP! And we would try to guess if the girls or the boys were the ones making the noise. We think it was the girl dancers. However this became one of our inside jokes of the tour that we would YIPPPPP a random throughout the tour.

Once dinner was over, about half-a-dozen of us walked back to the hotel with our driver. This group had a wonderful evening. The remaining thirty people all got ripped off in one way or another: over charged for drinks, incorrect change back, and aggressive cab drivers demanding more money; one person was physically grabbed and pulled back into the cab until she gave more money, and another had their driver pull a screwdriver on them. It was crazy. It’s too bad that Belgrade left us all with these bad memories.  It was otherwise a fantastic place that I would have liked to learn more about. 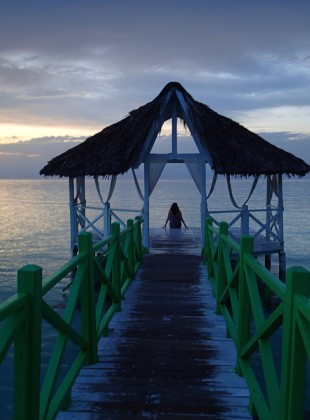 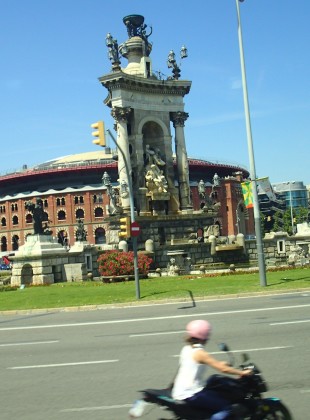 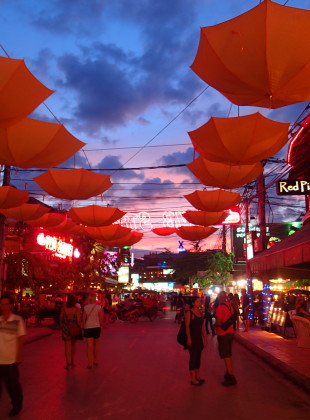