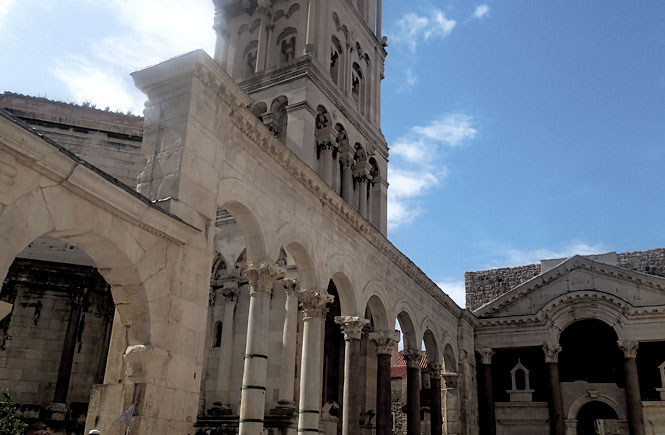 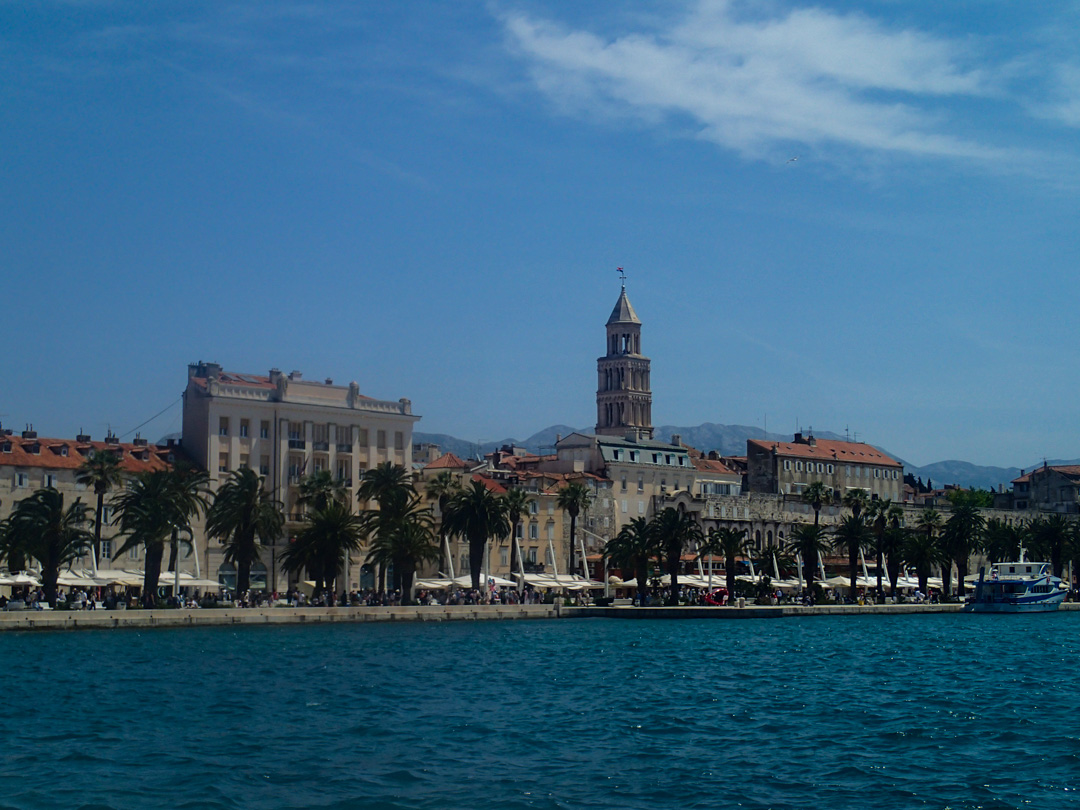 Day Two of our Best of Balkans tour. Today we started off with free time in Split. Our guide walked us to the old town of Split and gave us a few options of what to do.

So quick background on Split. Split is the second largest city in Croatia. According to our travel guide Carly, an old Roman Emperor called Diocletian thought Split to be the most beautiful spot in Croatia.  So he decided to build his retirement house there. (A note – online sources seem to think he choose the spot instead because it was close to other major cities and it had access to the sea incase a civil war broke out and he needed to escape. I like Carly’s version better.) A city formed around it and now we have a city there today. 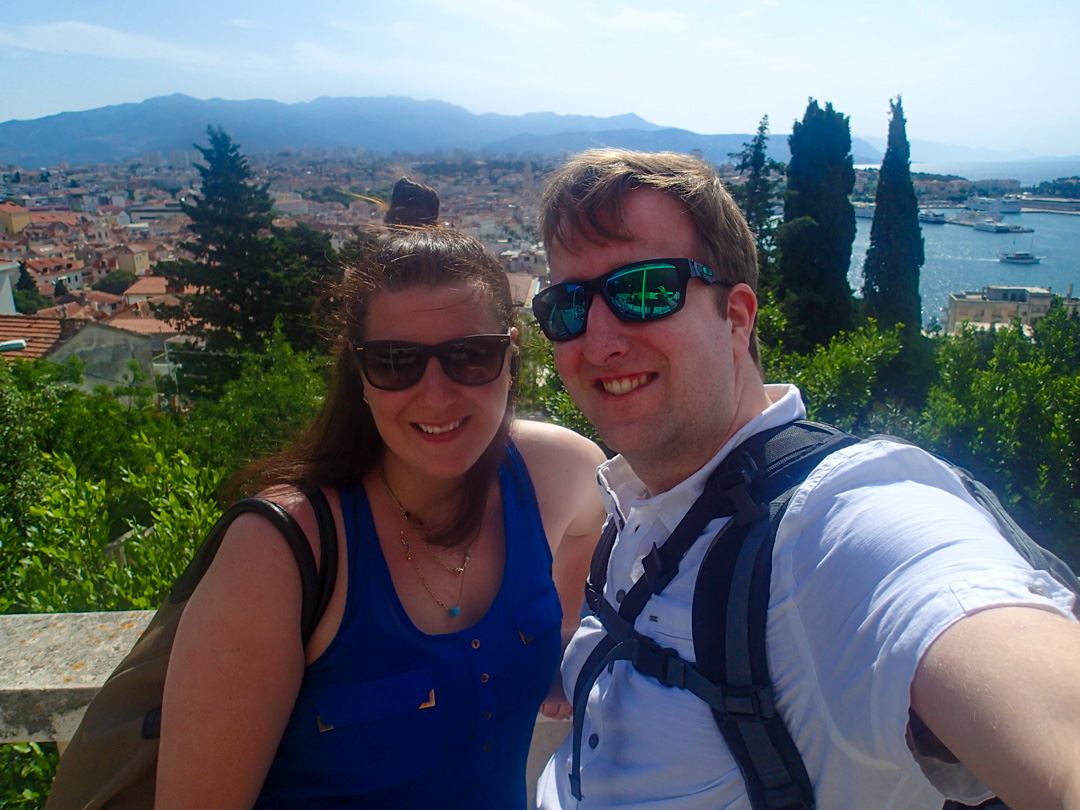 We first decided to climb up Marjan Hill to the first look out. Marjan Hill is a huge park beside the city. If you walk through the twisted streets of old town and climb up the stairs you can get to a lookout (which is half way up the hill). At this look out there are viewing platforms and a restaurant, so if you wanted you could get a drink or some food and enjoy the view. From this vantage point you can see the whole harbour full of cruise ships and yachts and the old town made of bright orange roof and old stone walls. We took the other route down. It was faster but had more stairs. (The winding gradual walk is the north route, the faster but way more stairs walk is south.)

Then we decided to wander though old town towards Diocletian’s Palace. We wandered up an old street that looked wider then the rest of the cobbles, and had new modern buildings mixed in with the old. It was actually integrated nicely. We also saw a fish market wrapping up. There were clearly lots of vendors filling the square earlier in the day but by 10 am we were down to 3-4 fish vendors. At this point we decided to go along the wall of Diocletian Palace, and try to find a way inside.

Inside the Palace walls is beautiful. It’s very “European” if that makes sense. Its also filled with tourist groups. You will see tour guides with their flags everywhere and large groups of people following them. The stores and markets inside the palace are mainly filled with souvenirs. 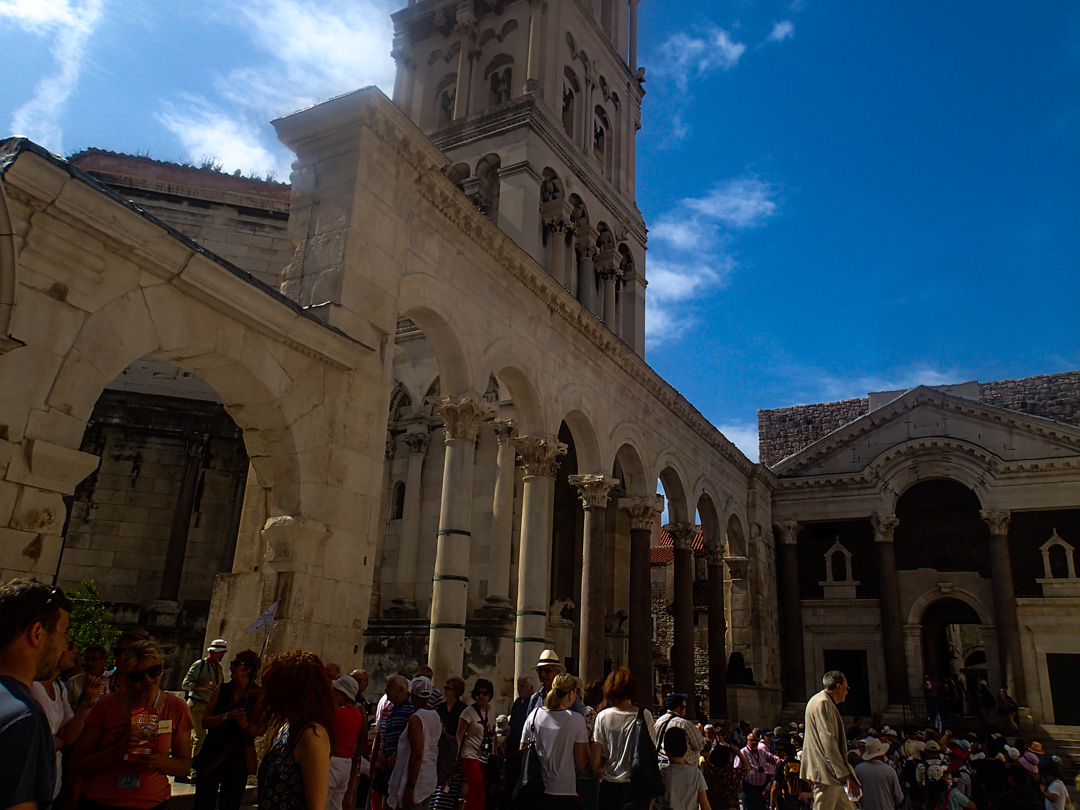 The main square of Split, called Peristyle Square is now a restaurant/ tourist central. It lives in the shadow of the Cathedral of St. Due. There are pillows on the steps that you can sit on and get served drinks and food and watch the people coming in and out of the square. We saw a commercial or something being filled there. There was a guy in a suit walking through the ruins being filmed. I would be curious to find out what it was for.

We then decided to go find ice cream and drinks at a cafe on the waterfront. These were again great spots for people watching, and we got a large table where we could get to know our tour mates. At this point me and Andrew decided to break off to see if we could find a place a little more local for lunch. We wandered the old streets of Varos. A suburb of split that used to house the old fisherman and farmers. We found this area was very residential and did not have a lot of restaurants, but we did find a bakery, and got sandwiches and cokes. 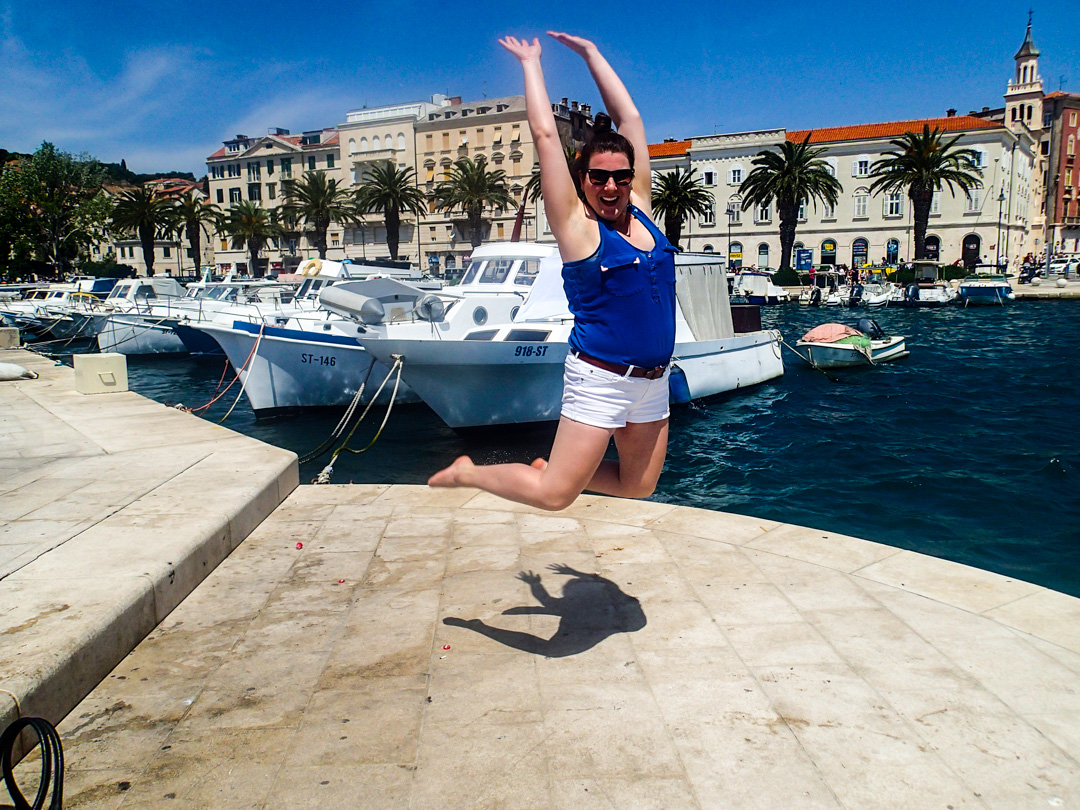 At that point we headed back to our meeting spot at RIVA, right on the waterfront, so that we could catch our bus to Dubrovnik. Rica is a modern green space right on the water that has plenty of benches and grass to relax on. We caught up with our group there and talked about the horrors of what you learned  in med school as we had a med student on our trip.

The ride from Split to Dubrovnik was along the coast, however, the coastline in Croatia is VERY mountainous. This means that the bus needs to wind up and down the hills to get to where its going. There are a lot of tunnels and bridges to get through the mountains. It is actually crazy to see. It also means there are no direct routes through this terrain.

Another to get there we needed to go through the Bosnian Boarder.  It is called the Neum Corridor. This corridor gives Bosnia a 51.2 km coastline, which offers them the opportunity to have an international seaport.to get though this corridor it takes 10 minuets of driving. At each boarder we had to show our passports, but we just got waved through. 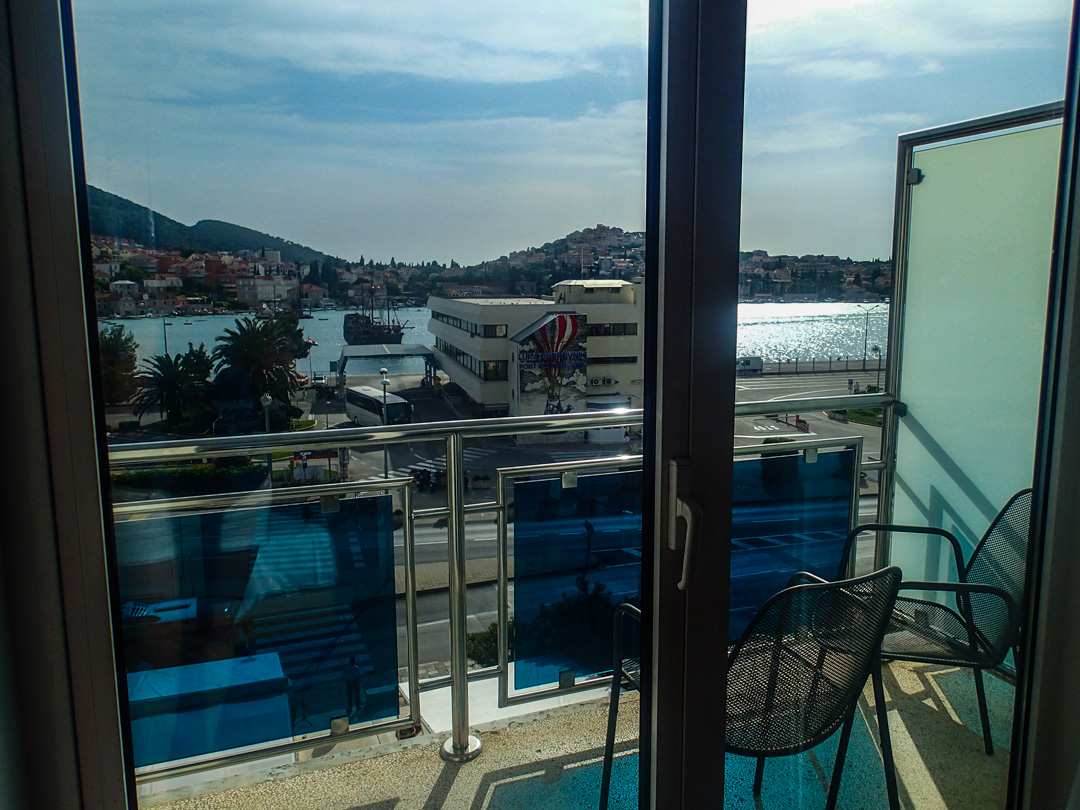 We arrived in Dubrovnik, our hotel was right on the water, and we had a balcony. I was so excited about this i yelled of joy out our balcony. Our tour mates laughed at my excitement. In true european fashion we had 2 single beds. We also had 40 mins to settle in and get dressed for dinner. Tonight’s dinner was on a boat cruise of the harbour.

We all cleaned up pretty nice. I should have made us take a group shot. But can’t go back in time now. So on thing to note about boats in Europe that is not a thing in Canada, is that it is perfectly acceptable to climb across 2-3 boats to get to your boat. Kinda a weird thing to do here, but that happened twice on this trip.

We sailed around the new harbour for our cruise. The waves were really big this day, so the boat was not able to go to the old harbour where the walls of the fort are, but the boat cruise was nice, and the food was great. On the boat we were first introduced to Rakia, a sherry known to Eastern Europe. It is made out of cherries, plums or apricots. For dinner we had a tapis plate with cheese, meat, olives, bread and anchovies. We also got fresh fish and coleslaw. The boat captain recommended that you eat fish with your hands to find the bones. it was actually the easiest way to eat a fish ever.  They also served us apple strudel which was awesome. 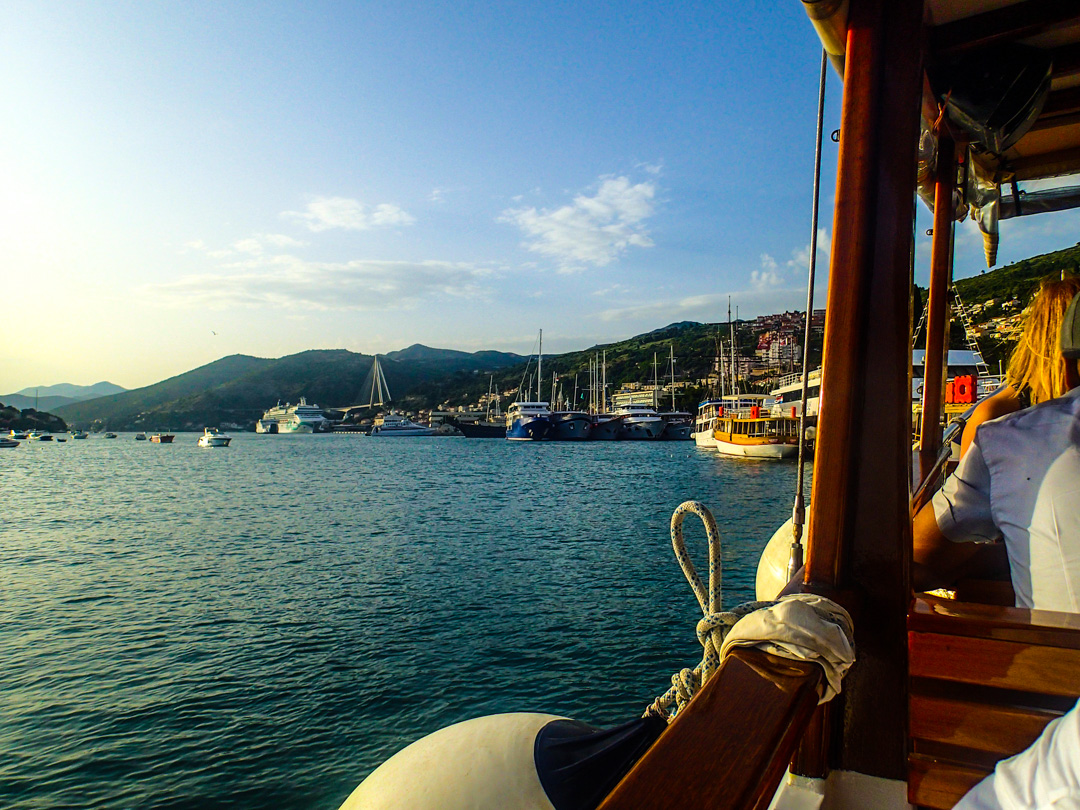 We stayed on the boat to watch the sunset, then headed into old town dubrovnik to go to the Galerie Cafe, which is also known as the Bucket Bar. The have three options for bucket drinks, but we all got the tropical blue one, because the other two options sounded terrible. The Galerie Cafe was in a small alley up quite a few flights of steps towards to outer walls. The night was beautiful, so most were sitting on the steps and benches outside. Which really why wouldn’t you want to be outside when the weather is gorgeous and you basically sitting on steps that people have walked up and down for hundreds of years.

Near the end of the night we started breaking into small groups to go explore the streets by twilight light. Honestly this city is so romantic by night. It’s street lights gleam on the polished stone street. It’s so clean. On the corner below you can see that there are musicians who play live music each night. Time disappears and it is like walking into a dream. We knew we needed to get other people on our tour to explore this with us, so we grabbed Krista, Amy, Griffin, and Kelsey.

They too were blown away about how the later it got (it was like 11pm) the streets emptied, and we had the city to ourselves. They also thought it was the prettiest city ever, so I know I’m not just talking from an old married perspective. We walked through the city until we came upon “the steps of shame”. Ok so on our trip we had a lot of HUGE ‘Game of Thrones’ fans.  And apparently there is a lot of hype about these steps… ok, cool they have a fun curvey shape… but… they are just a pretty stair case.

They are actually called “Jesuit Steps.” They are very similar to the Spanish Steps in Rome. They lead upto Jesuit Church of St. Ignatius of Loyola. One thing to know, they are a lot quieter at night if you want a picture of them. During the day, they are covered by tourists. By night you can re-enact the ‘Game of Thrones’ scenes if that is your jam. 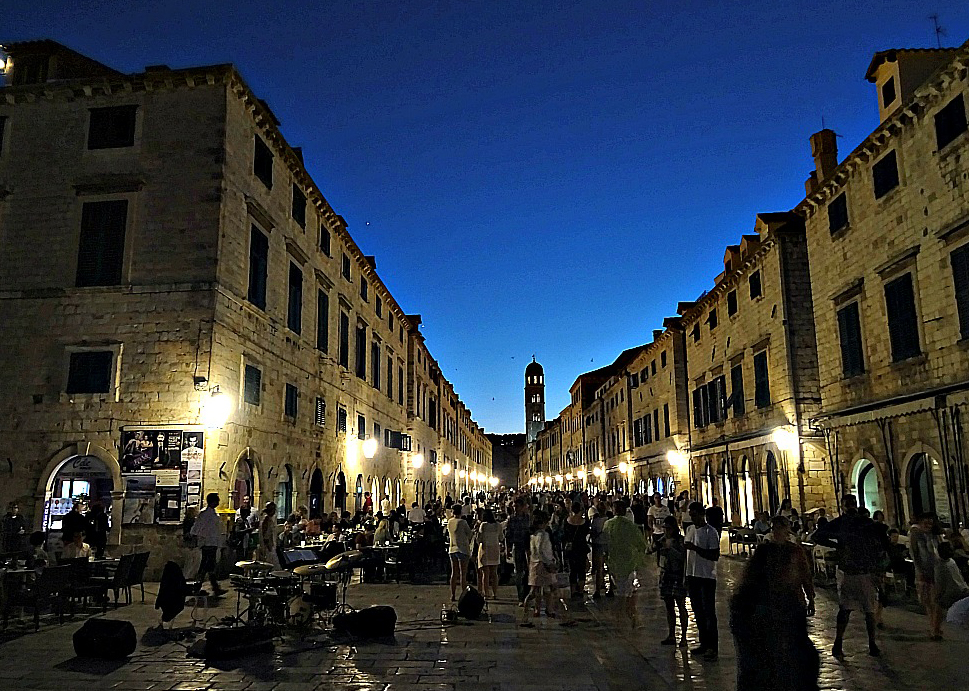 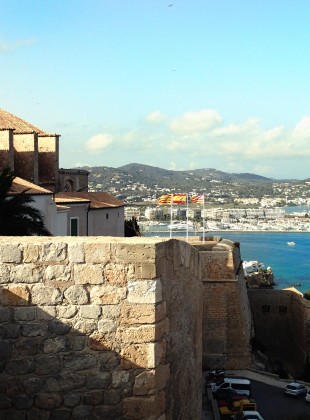 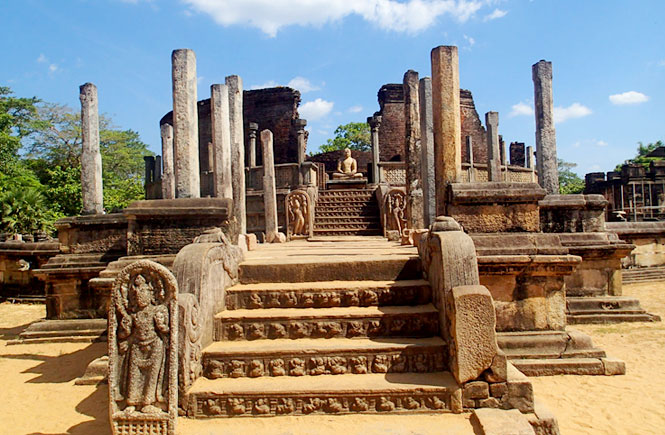 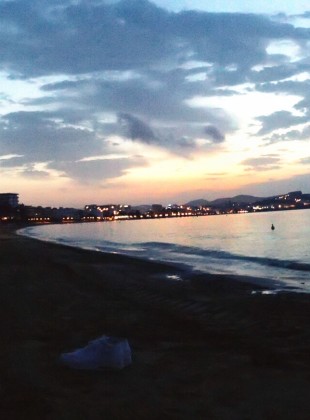